This five-generation funeral business was started by Benjamin S. Baker who established the firm in 1894. He started a small grocery and furniture store in a little town of Americus, Missouri. Benjamin was a cabinet maker and also made caskets, thus the beginning of “undertakers” in the Baker family.

In 1904, Benjamin’s son, Barton, married Nettie Jordan and joined his father in the business. In 1918, he went to St. Louis to embalming school and received his license as an embalmer and funeral director. They purchased a horse-drawn hearse drawn by two black horses and used this until 1925 when they bought their first motor driven hearse, a gray Dodge. 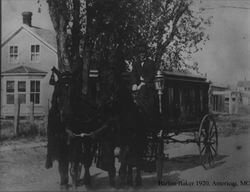 Barton’s only son, Durward, attended the American School of Embalming in St. Louis and received his Embalmers and Funeral Directors license in 1929. Durward worked for Albert H. Hoppe in St. Louis as an embalmer until 1931 when he went into business with his father. On April 3, 1931 Durward married Mary Juanita Krueger and they had three children, Donald, Judith and Barbara.

In the early years, preparation of the body and visitations were carried out in the home. It was not until 1945 that a small home in Americus was converted into a funeral home and named the Baker Funeral Home. After the death of this father in 1956, Durward and his wife built a new funeral home in New Florence, Missouri and moved there in February 1959, closing the funeral home in Americus.

The Baker-Toedtmann-Grosse Funeral Home is still in operation today in New Florence, Missouri.

In 1959, Judith married Leon Toedtmann of Hermann, Missouri. Leon attended Westminster College, Fulton, Missouri and Dallas Institute-Gupton Jones College of Mortuary Science in Dallas, Texas, graduating and receiving his license in 1962. In 1963, Leon and Judy moved to Hermann and opened a funeral home under the name of Toedtmann Funeral Home. They have three children, Susan, Jeffrey, and Barton.

In 1959, Barbara married Landon Grosse of Big Springs, Missouri. Landon attended University of Missouri and John A. Gupton School of Mortuary Science in Nashville, Tennessee, graduated and received his license in 1966. Landon returned to Hermann and went into the business with Leon. Landon became a full partner and the funeral home was then called Toedtmann & Grosse Funeral Home. Barbara and Landon have three children, Timothy, Michael and Benjamin.

Leon and Landon worked in conjunction with their father-in-law and operated the Baker Funeral Home along with Toedtmann & Grosse Funeral Home.

In 1985, Barton Toedtmann and Benjamin Grosse graduated from St. Louis Community College with an Associate of Applied Science in Funeral Service. Bart was married to Kristine Walkenbach of Hermann and served his internship at the Freeman Mortuary in Jefferson City. Ben Grosse married Melanie Strube of New Florence and served his internship at the Paul Funeral Home in Warrenton, Missouri.

In 1986 Leon and Landon purchased the Blumer Funeral Homes, which included locations in Hermann, Morrison and New Haven. This enabled Bart and Ben to come back and work with their fathers. Currently Toedtmann & Grosse Funeral Home has four locations, Hermann, New Haven, New Florence and Morrison.

In 1972 Leon Toedtmann and Landon Grosse purchased the Oak Haven Memorial Garden Cemetery. The cemetery which is located 5 miles south of Hermann, MO on Hwy 19 is managed by the funeral Home. If you have any questions about the cemetery, please contact the office at 1-573-486-5429.

A year of daily grief support

Our support in your time of need does not end after the funeral services.  Enter your email below to receive a grief support message from us each day for a year.  You can unsubscribe at any time.