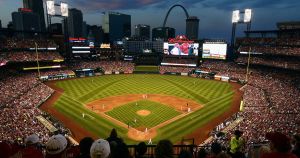 Born Betty Jo Marburger on November 28, 1929 in Columbus, Ohio, her parents were Harold & Mary Helen Litzenburger Marburger.  When Betty was 5, her Dad was killed while repairing a trolley bus in 1935, also leaving behind 3 siblings ages 7, 20 mos, & 10 days.  They then moved to Florida to live with grandparents, later moving back to Ohio.

Betty loved to bake cookies & sweets. Her cut-out & decorated Christmas cookies were holiday favorites as were her festive Christmas cookie platters. She enjoyed ceramics class, square dancing with Dick, & was co-President with him of the Clopton High School Band Boosters when they moved to the Dundee Farm in Clarksville, MO in 1970. They also lived near New Haven, MO where Betty owned & operated BJ’s Ice Cream Shop.  After Dick passed, she moved to Bloomington, IL across the street from her son Dale.  In her later years she was an avid St. Louis Cardinals fan besides a fan of whatever sport her 4 great grandsons were in.  She was a member of Washington (MO) UMC & attended Calvary UMC in Bloomington.

The family is having a private graveside service at the New Haven Cemetery in New Haven, MO under the direction of Toedtmann & Grosse Funeral Home in New Haven, with Duke Duvall (of Light of the World Ministries & high school classmate of Dale & Gail) officiating.

Memorials can be made to UMCOR – United Methodist Committee on Relief (https://uncmission.org/umcor/ )